The term “Machine Learning” is coined by Arthur Samuel in 1959 while at IBM.

According to Michael I. Jordan, the ideas of machine learning, from methodological principles to theoretical tools, have had a long pre-history in statistics. He also suggested the term data science as a placeholder to call the overall field. You can refer to below, one the most famous venn diagram for Data Science. 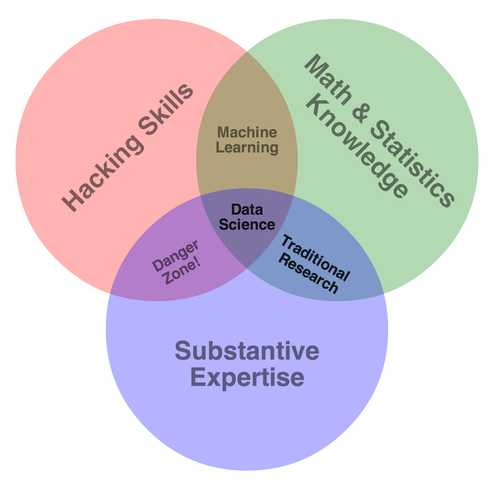 How ML is different from AI ?

In the early days of AI, an increasing emphasis on the logical, knowledge-based approach caused a rift between AI and machine learning. By 1980, expert systems had come to dominate AI, and statistics was out of favor.

Machine learning, reorganized as a separate field, started to flourish in the 1990s. The field changed its goal from achieving artificial intelligence to tackling solvable problems of a practical nature. It shifted focus away from the symbolic approaches it had inherited from AI, and toward methods and models borrowed from statistics and probability theory.[11] It also benefited from the increasing availability of digitized information, and the ability to distribute it via the Internet.

Here is another famous venn diagram.

Hal Varian, Google’s chief economist, predicted in 2008 that the job of statistician will become the “sexiest” around. Data, he explains, are widely available; what is scarce is the ability to extract wisdom from them. Data are becoming the new raw material of business: an economic input almost on a par with capital and labour.

Machine Learning is a peer-reviewed scientific journal, published since 1986

This is in Progress