Facebook prophet is simplest way to get started with time series analysis with python. Please refer to this post to know how to install prophet on Ubuntu.

We will have a look at official example with one complete program.

Here is the output on terminal 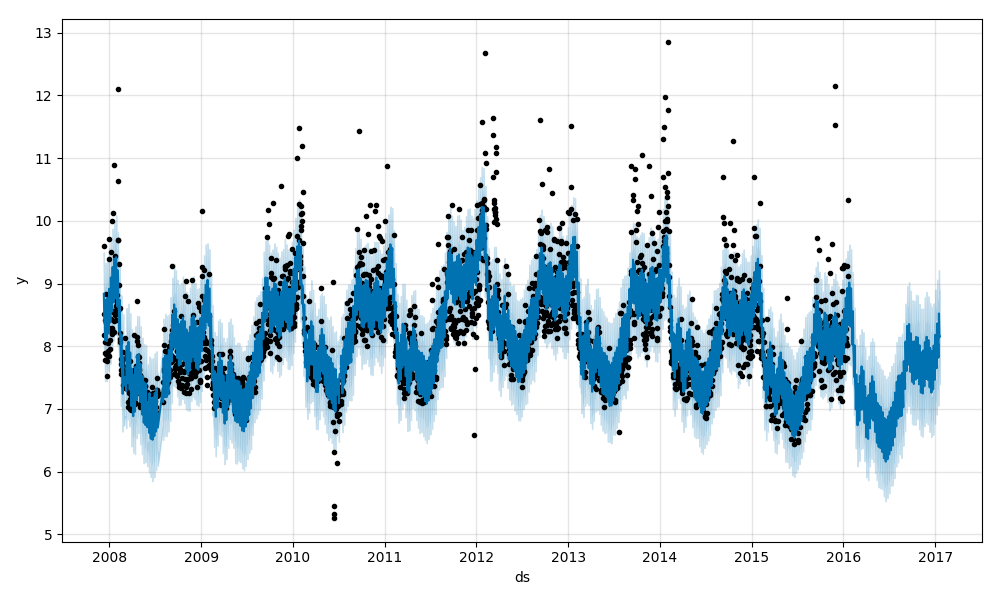 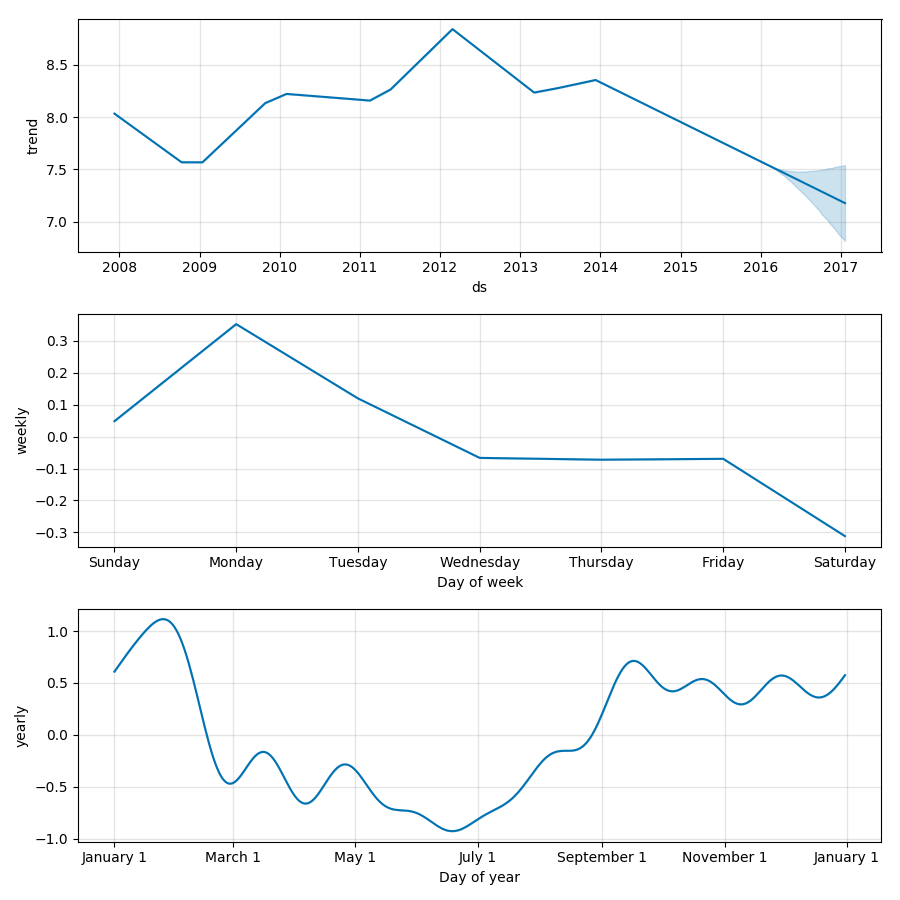 Let us try to run the same by using column name as date and value instead of ds and y. When I tried this, I got following error.

To get rid of this message, add daily_seasonality=True prophet object. It will look like below.

Prophet is forecasting librabry developed by facebook, it has been open sourced by facebook. Following is the simple command to install it.

It takes some time considering number of dependencies. You can verify installation by login to python3.6 console, importing module and checking it.

Please note that while using facebook prophet, correct way to import library is as below

When two sets of data are strongly linked together we say they have a High Correlation.

In common usage it most often refers to how close two variables are to having a linear relationship with each other. Here is sample values and shape for correlation

This is most commonly used correlation coefficient

The population correlation coefficient ρX,Y between two random variables X and Y with expected values μX and μY and standard deviations σX and σY is defined as

When calculated using numpy, it returns The correlation coefficient matrix of the variables.

the Kendall rank correlation coefficient, commonly referred to as Kendall’s tau coefficient (after the Greek letter τ), is a statistic used to measure the ordinal association between two measured quantities. A tau test is a non-parametric hypothesis test for statistical dependence based on the tau coefficient.

Correlation can have a value:

Important points to be noted

Before calculating mean, median and mode, let us look at types of data and characteristics of the data. At a very high level data can be classified as categorical and quantitative data. Both can be further classified as below

Mean is nothing but average. It can be calculated in python or by using numpy

Middle value of observation when ordered from low to high

There are so many online courses that you might get overwhelmed bu the sheer numbers.

a set is a collection of objects (called members or elements) that is regarded as being a single object. To indicate that an object x is a member of a set A one writes x ∊ A, while x ∉ A indicates that x is not a member of A.

A sequence is a set of numbers written in a particular order.

A series is something we obtain from a sequence by adding all the terms together. Please note its not sequence of numbers, its sum of numbers in sequence.

A progression has a specific formula to calculate its nth term, whereas a sequence can be based on a logical rule like ‘a group of prime numbers

Here is an example of sequence

Arithmetic sequence is a sequence of numbers in which each term after the first is obtained by adding a constant (d).

An arithmetic progression is given by following formula

where a = the first term , d = the common difference

Some of the important formulae

A geometric progression, or GP, is a sequence where each new term after the first is obtained by multiplying the preceding term by a constant r.

Where a : first term and r is constant

are in Harmonic Progression(HP) if

are in Arithmetic progression

Since I had decided to start my buttoms up approach for learning data science, I decided to start by refreshing and learning mathematics. I tried to search for some books from which I can learn, but found some really interesting and god MOOC Course and free ebooks (all legal).

If there appears to be no association between the proposed explanatory and dependent variables (i.e., the scatterplot does not indicate any increasing or decreasing trends), then fitting a linear regression model to the data probably will not provide a useful model. A valuable numerical measure of association between two variables is the correlation coefficient, which is a value between -1 and 1 indicating the strength of the association of the observed data for the two variables.

Following are the ways to do linear regression using python

and here is the output

Here is the code

and output of this code is as below

If you look at code, it seems finding linear regression using scipy is shortest and easiest to understand.

The strength of the linear association between two variables is quantified by the correlation coefficient.

Formula for correlation is as below

the least-squares regression line will always pass through the means of x and y, the regression line may be entirely described by the means, standard deviations, and correlation of the two variables under investigation.

Pearsons correlation coefficient is a measure of the linear correlation between two variables X and Y. It has a value between +1 and −1 2.t is obtained by dividing the covariance of the two variables by the product of their standard deviations.

Goodman and Kruskal’s gamma is a measure of rank correlation, i.e., the similarity of the orderings of the data when ranked by each of the quantities. 5

You can find his report here

Now let us try to calculate these correlations using python, you can find code below

output is as below: